Streaming giant Netflix (NFLX 0.08%) has seen red in the last year. The company’s stock has dropped 58% in the past 12 months due to multiple headwinds (more on these below). However, Netflix shares have had a strong performance over the past three months with shares up more than 41% over this period.

Can Netflix keep these earnings and maybe even extend them over the next few months? It’s hard to say, but there are good reasons to be optimistic about the company’s short-term future. Let’s consider two reasons why Netflix shares may have hit rock bottom. 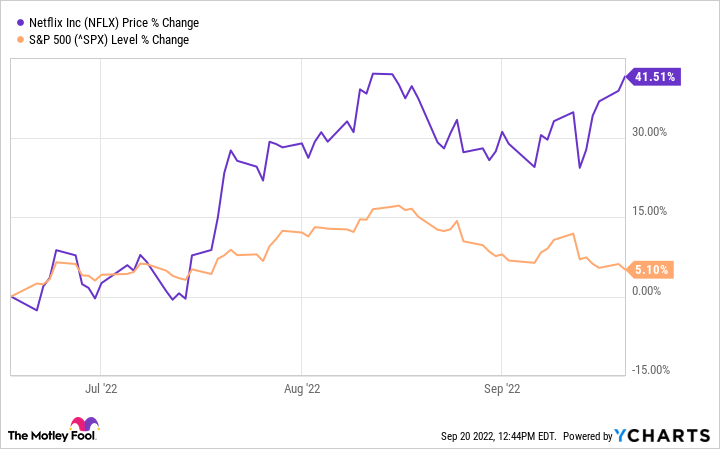 One of the main reasons Netflix has come under pressure lately is the company’s poor user growth. The streaming pioneer has lost subscribers, and when combined with the increasingly competitive landscape of the streaming industry, that doesn’t bode well for its future. Netflix closed the second quarter with 220.67 million paid subscribers, a decrease of 970,000 compared to the previous quarter.

However, Netflix expects to return to subscriber growth during the third quarter. Management is driving for one million net new subscribers for the period. While this would be a decrease from the 4.4 million new subscriptions added during the previous year period, it would still be a reversal of recent trends.

Keep in mind that the company’s audience skyrocketed during the early days of the outbreak. What we’re seeing in terms of lower (and sometimes negative) user growth is a period of adjustment, given the inflated numbers we saw at the start of the pandemic. In any case, the growth of Netflix users has been interrupted by headwinds linked to the pandemic.

Netflix’s problems with strong competition and password sharing have led management to consider new opportunities. First, the company plans to introduce a subscription option that includes advertisements. This option would be cheaper than its current plans, between $ 7 and $ 9 according to some reports, potentially attracting price-sensitive consumers who can choose from more streaming services than ever before.

Second, Netflix estimates that over 100 million households have access to its platform through password sharing. In other words, millions of viewers are enjoying Netflix for free. The tech giant’s ad-supported tier could help convert some of these viewers into paying subscribers, but it’s also testing additional rates for password-sharing families in select markets.

According to preliminary reports, Netflix itself estimates that its ad-supported plan – which is expected to go into effect by early November – could attract around 40 million subscribers by the third quarter of 2023.

In addition to new subscribers, the company will also generate revenue from ads on its platform. Oppenheimer Analyst Jason Helfstein predicts Netflix will amass $ 4.6 billion in ad revenue by 2025. That would represent only 15% of the company’s final revenue over the past 12 months, but coupled with new subscriptions, the ad-supported tier could work wonders for Netflix.

These developments could help the company extend its recent stock market earnings.

Don’t focus too much on the short term

It is always difficult to predict short-term fluctuations in the stock market. Netflix shares could fall once again if they didn’t live up to the indications for subscribers in the third quarter. Furthermore, the economic landscape remains complicated with high inflation, among other issues. These market-wide issues have impacted ad spend, leading to lower revenue for companies that rely on ads to generate much of their sales, including Rokuanother streaming giant.

That’s why investors shouldn’t take too much advantage of Netflix’s rush over the past three months. Instead, it’s best to focus on the company’s long-term prospects, which remain solid. Netflix’s new ad-supported tier should help with user growth. Business engagement continues to grow as streaming captures people’s watch time even more. In August, streaming accounted for 35.0% of TV viewing time in the United States, compared to 34.5% for cable.

Note that streaming first surpassed cable in this category in July. And in August, Netflix alone was responsible for 7.6% of screen time in a tie overhead with Alphabetit’s YouTube. There remains a lot of room for growth in the global streaming industry as it has yet to reach the same level of penetration in many countries as in the United States

Netflix’s solid name recognition (it has achieved the rare feat of becoming a verb), shrewd content strategy, and increased engagement will help it deliver solid long-term returns from here on out.