The All Ordinaries (ASX: XAO) and S&P/ASX 200 (INDEXASX: XJO) were on hold ahead of the RBA’s latest board meeting and interest rate decision. Elsewhere the Zip Co Ltd (ASX: ZIP) share price was dumped by investors.

RBA rates on the rise

The large move in the ASX 200 was predicted by only a few ‘experts’, with the RBA highlighting the fact that inflation had increased significantly around the country, due to energy and materials prices. Therefore, action needed to be taken.

It remains a challenging proposition for the RBA: seeking to normalise interest rates at a time when surging consumer prices on daily goods are already hitting demand and sentiment. The RBA clearly risk sending the economy into a recession in 2023 and beyond. You can see what people around the world are searching the internet for in the chart below. 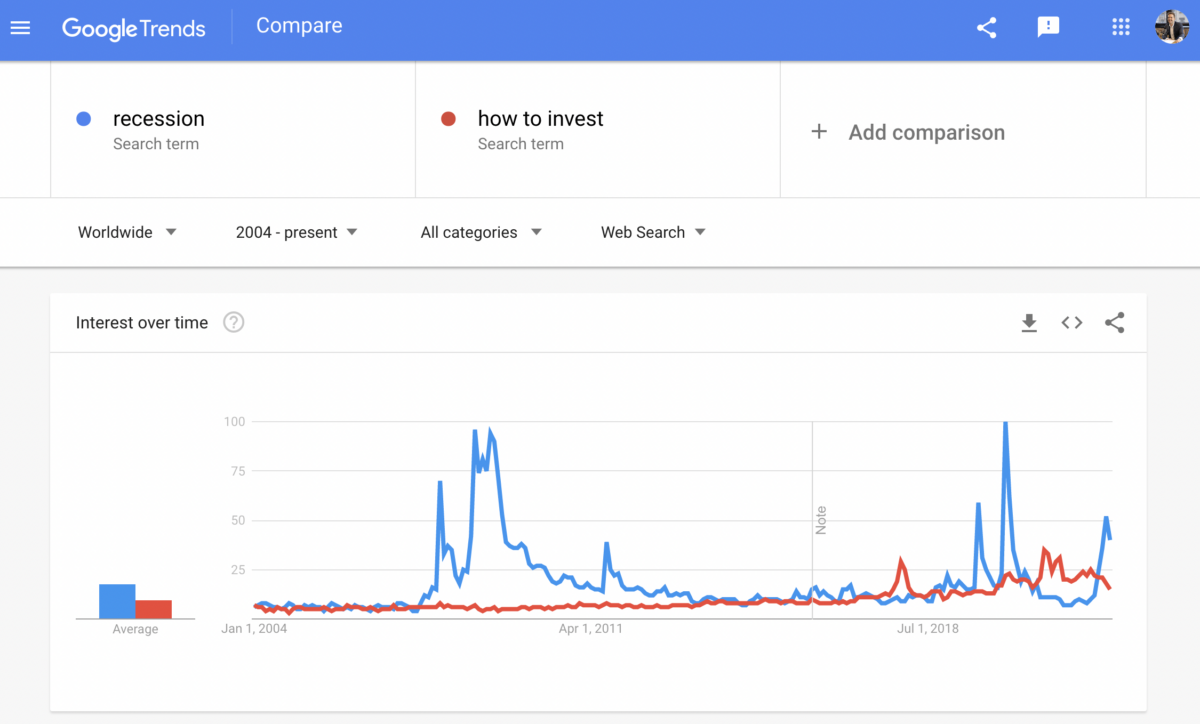 The higher RBA interest rates will have a direct hit on loan repayments, which has seen consumer sentiment fall to the lowest point since August 2020, down 4.1 per cent in June.

Elsewhere, it was a similar story for business, where confidence also slumped 22 per cent to 100.2 points. Zip Co (ASX: ZIP) was the biggest detractor, falling 14.4 per cent, with just 20 or so companies managing to deliver a positive return.

Fund managers were among the top performers on Tuesday, with Magellan Financial Group (ASX: MFG) shares gaining 2.1 per cent and GQG Partners Inc (ASX: GQG) falling 1.2 per cent. GQG reported a 4.6 per cent increase in assets under management in May, growing to US$90.4 billion, with international equities gaining US$2 billion and the major highlight following strong outperformance from the underlying funds.

Sandfire Resources (ASX: SFR) topped the market, gaining 3.4 per cent as the copper price remains strong. Perceived lower quality and technology companies were among the weakest, falling 3 per cent. Ingham’s Group (ASX: ING) remains a beneficiary of poultry shortages, gaining 3.2 per cent, with news that a shortage of lettuce had resulted in cabbage being used as a replacement by KFC outlets, another sign of a stressed supply chain and lack of labour.

Real estate followed technology lower on a further jump in the bond yield, which has the potential to hit property valuations. Goodman Group (ASX: GMG) shares fell 3.7 per cent.

Global markets staged a mid-session comeback on Tuesday, with all three benchmarks reversing losses to gain close to 1 per cent each. US stocks were led by the Nasdaq, which finished 0.9 per cent higher, on the back of a 1.7 per cent jump in Apple Inc (NASDAQ: AAPL).

AAPL stock gained after flagging a significant upgrade to their MacBook Air and Pro laptops.

However, on Tuesday, it was all about Target (NYSE: TGT), the retail giant. Target downgraded earnings expectations and flagged falling profit margins as it seeks to deal with an excess of product/inventory. Target’s management will now seek to cut prices to remove excess inventory, potentially challenging the inflation narrative. This is being seen as a shift from goods sold to services and meant the consumer sector was the only one to finish lower.

Finally, the World Bank downgraded global growth expectations for 2022 to just 2.9 per cent from the previous forecast of 4.1 per cent due to food shortages and the war in Ukraine.