It isn’t easy to know what will transpire in the stock market in the next 12 months. The COVID-19 pandemic isn’t over, and the world faces uncertainty regarding various economic and geopolitical issues. However, some companies have what it takes to perform exceptionally well in the next year, at least according to Wall Street. 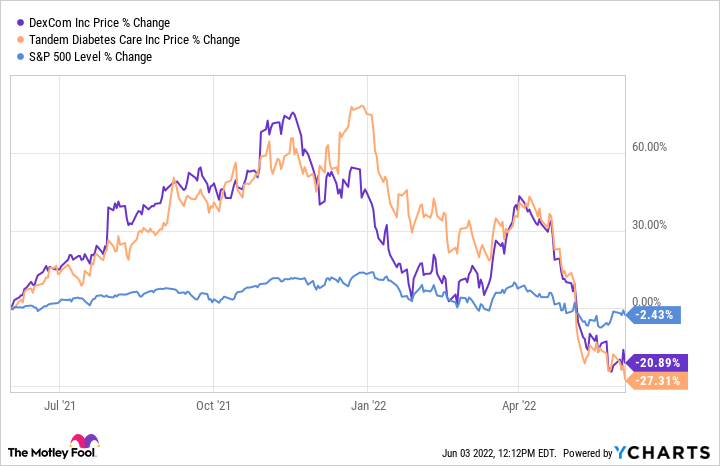 DexCom’s shares fell along with the broader market in the past 12 months. While issues outside the company’s control contributed to its struggles, DexCom faces its own problems. Perhaps most notably, the company’s top-line growth rate has declined in recent quarters. Also, DexCom’s shares look pricey, with a forward price-to-earnings (P/E) ratio of 91.3 compared to the healthcare sector’s average forward P/E of 16.

Still, DexCom’s average price target of $540.38 (according to Yahoo! Finance) represents a potential upside of 80.6%. Could DexCom’s shares rise that much in the next year? On the one hand, there are great reasons to be optimistic about the company’s future in the next 12 months and beyond. DexCom is currently awaiting regulatory clearance in the U.S. for its newest continuous-glucose-monitoring (CGM) device, the G7. The company’s current crown jewel, the G6, helped it grow its revenue and earnings in the past few years as CGM technology has grown in adoption. That’s not surprising since CGM devices are associated with better health outcomes for diabetes patients.

The G7 should help patients achieve even better outcomes than its predecessor, in addition to being smaller. The launch of this new gadget could help DexCom make even more headway within its target market. As the company argued last year, the CGM market remains underpenetrated even in the U.S., which is a worldwide leader in the technology.

So there remains plenty of room to grow within the current population of diabetes patients in the U.S. and especially abroad. Further, diabetes is expected to become even more prevalent in the coming decades. This unfortunate trend will likely help propel CGM adoption. And as one of the leaders in the field, DexCom is well-positioned to benefit. I do not foresee the company’s shares soaring by 80% in the next year, but that’s no reason to avoid the stock.

And although DexCom shares look expensive, the company will justify its valuation in the long run, at least for those investors willing to be patient. DexCom’s revenue increased by 25% year over year to $628.8 million in the first quarter. Its adjusted earnings per share decreased to $0.32, down from $0.33.

Despite the issues it has encountered lately, I expect DexCom to deliver market-beating returns in the long run, and that’s why I think the company is worth buying today.

Could Tandem Diabetes Care’s shares more than double? Wall Street’s average price target for the insulin pump manufacturer is $136.58, representing an impressive upside of 113%. In my view, Tandem is unlikely to live up to this target in the next 12 months. But regardless, the company’s shares are worth considering.

Tandem Diabetes Care’s crown jewel is the t:slim X2 insulin pump. One nifty feature this device boasts is that it can be paired with DexCom’s G6 to completely automate patients’ insulin delivery process and help them remain within their target glucose range. Performing this task manually — with the possibility of human error complicating things — is far less convenient than having it done automatically.

Despite its innovative insulin pump, Tandem Diabetes Care has faced many of the same issues that have plagued DexCom. The company’s revenue growth rates have been on a downward trend, and it is not profitable. In the first quarter, the company’s top line increased by 25% year over year to $175.9 million. And its net loss per share came in at $0.23, much worse than the $0.08 it reported during the year-ago period.

Declining revenue growth rates, coupled with worsening losses, is a bad combination in any economic environment — especially our current, challenging one. Is there any hope for Tandem Diabetes Care? The answer is yes. The company still has miles of potential growth ahead. In the U.S., only 36% of type 1 diabetes (T1D) patients use insulin pumps while the remaining 64% still rely on painful and multiple daily injections (MDIs).

Abroad, the percentage of T1D patients using insulin pumps is just 12%. There are also plenty of opportunities in the type 2 diabetes market. Tandem Diabetes Care has set a goal to achieve an installed base of 1 million diabetes patients. That would represent a significant upside from its current installed base of 350,000 as of the first quarter.

To put things in context, Tandem had an installed base of about 240,000 customers at the end of the first quarter of 2021. The company’s ability to grow its installed base should work wonders for its revenue and profits in the years ahead.